Developers, DevOps, and CyberSecurity: Are they the new leading professions? - Techylem
16650
post-template-default,single,single-post,postid-16650,single-format-standard,bridge-core-1.0.5,ajax_fade,page_not_loaded,,qode_grid_1300,qode-content-sidebar-responsive,qode-theme-ver-18.1,qode-theme-bridge,qode_advanced_footer_responsive_1000,bridge,wpb-js-composer js-comp-ver-6.0.2,vc_responsive

Developers, DevOps, and CyberSecurity: Are they the new leading professions? 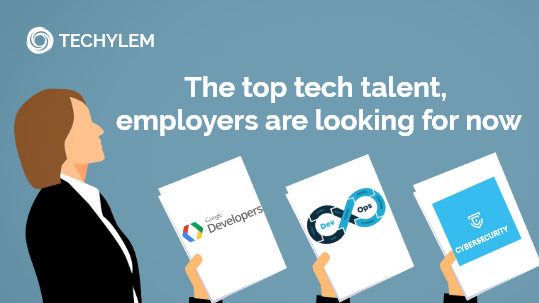 04 Sep Developers, DevOps, and CyberSecurity: Are they the new leading professions?

There are many professions in the field of Information and Technology which are in demand nowadays. Developer, DevOps, and CyberSecurity are three of them. We will discuss why these fields are more popular than others and why employers want to hire these professionals.

Let’s first examine what these professions are and what it requires to come in this field.

This is a term that is mostly known by everyone because of its worth. Computer Science students or people in that field know about this term very well. Also, people who do not have any experience know about this field as well because our World is moving more towards technology and Developers are the biggest helpers in this case.

According to a survey, there are 100,000 software developing companies in the World (Microsoft with ranking No.1). They all focus on building great applications for their users. And for that purpose, they need a lot of developers. Developers are those people who do coding and make usable apps and software.

Android Developers, Java Developers, Python Developers, and iOS developers are the few names listed that companies are mostly in demand nowadays. One thing to mention is that the World is moving towards Artificial Intelligence. We want machines to work like humans and for that purpose, developers are using python and other new languages.

Almost every gadget and application we use has coding involved in it and the credit goes to Developers.

So we can conclude that Developers are a highly paid and in-demand profession. So if you are interested and have the right skills you can always take a step forward to move into this field.

This is quite a new term and it was first heard between the years 2007 and 2008. When the people from the development team and operations team collaborated, they reached a consensus that if they collaborated during the development phase of a product it would lead us to better results.

Before the DevOps developing team used to work alone and after their whole work operations team used to check it. It wasted both their time and effort. And a new term came into the market DevOps which then became a reason for many other job openings.

So DevOps is a combination of two professions: Developers and Operations. It’s an agile methodology and because of its agile nature employers tend to look for such people.

Few more names in this field are DevOps Engineer, DevOps Managers, DevOps Architect, and DevOps Test Analyst. Employers are looking for these professionals nowadays. And not only this it’s a highly paid field also.

Few certifications related to this field can boost up your resume or CV. So best of luck if you want to join this field.

As we are progressing and moving on online platforms, one thing becomes very necessary: cybersecurity. Protecting your important data, computers, and mobile phones from attacks is very important. Cybersecurity deals with all the issues related to the security of data.

Our devices are always on the target of hackers. So a strong protection system is necessary. That’s why companies always look forward to higher experienced Cybersecurity professionals. This profession has its roots in many fields like network security, application security, information security, and operational security.

There are hundreds to thousands of types of cyber attacks and threats. CyberSecurity professionals look after the security systems and make sure that the data does not get hacked or breached.

So we can get an idea of why this field is so important for any business and why most hiring managers tend to hire them.

The three major fields that we have mentioned are the top priorities of any business. Because without these professionals, many software developing companies may not run properly. This is why we can see that the job postings are more related to software developers, DevOps and Cybersecurity.

These three professions have certain other fields which can be pursued by people. The World is advancing in technology and so people have to keep their knowledge up to date about trends in technology. What are the likely professions which are in demand these days and what kind of candidates hiring managers are looking for?

Not only this but they are highly paid as well. Now more people are getting into this field because of its increasing scope day by day. In Universities and Colleges, special courses are available to get hands-on experience in these fields. Also, there are many certifications available which a person can do to boost their CVs and impress hiring managers.